Yesterday I had the chance to talk to a group of business folks about Obama and the US Economy. Since I am, essentially, totally unqualified to discuss economic issues, I concentrated my talk on the recently passed stimulus package, and a few thoughts about the political dimension in which Obama (and therefore all companies seeking to offer services to the government) are currently operating.

Since a couple people have expressed an interest in the presentation, I've posted the slides below as JPEGs. The presentation would be, of course, far better with the benefit of my witty reparte, learned commentary and devastating joke - but I guess we'll just have to make do with these. 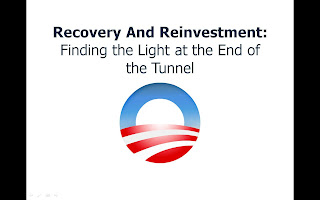 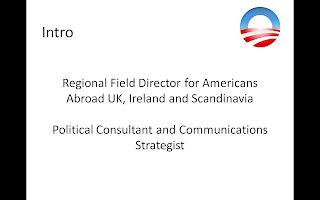 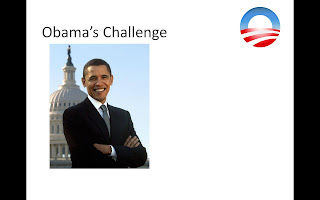 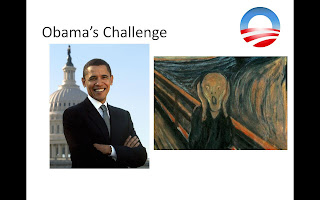 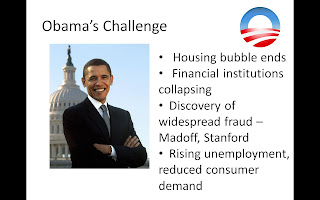 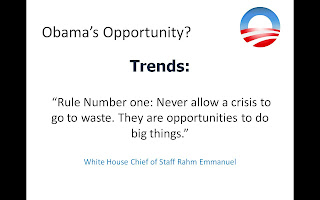 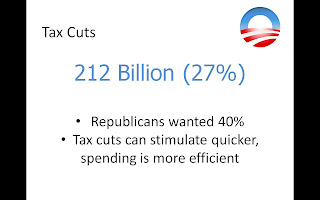 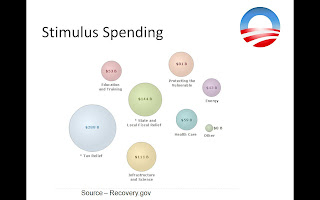 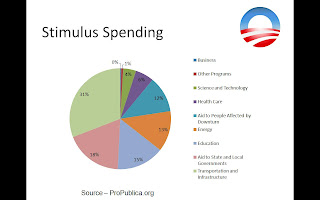 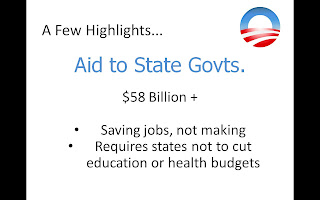 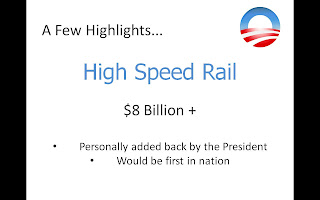 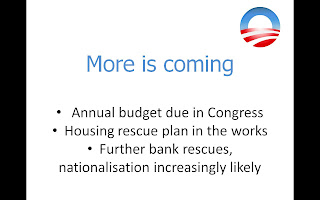 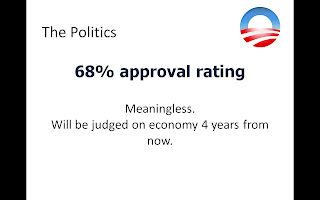 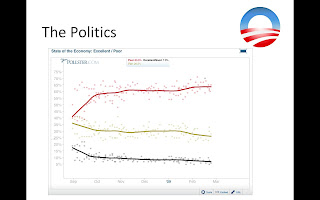 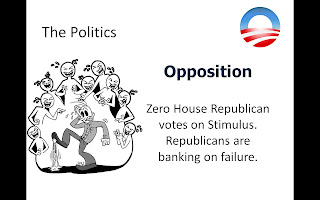 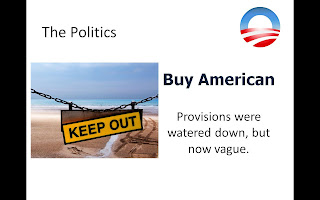 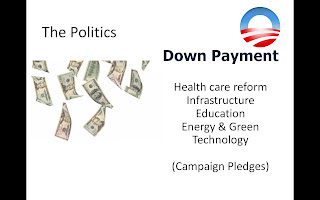 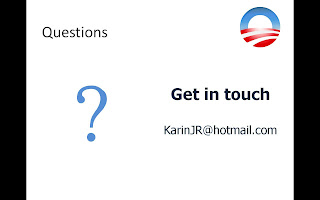 Rejoice: Birth Control Funding is Back

Turns out, when I speculated that the funding for state provided birth control that was cut from the stimulus package over Republican objections wouldn't be dropped for good, I was right.

I've just sent around a note to my lists about next week's local elections here at Democrats Abroad, UK and thought I would post it here as well, FYI:

Next Sunday, the Democrats Abroad General meeting and elections will be held here in Central London. For those of you who are eligible voters (Americans and DA members), I'm hoping that most of you have chosen to RSVP and are planning on attending the meeting.

As you all hopefully know by now, I will be running for Vice Chair. I'd welcome and be enormously grateful for your support! But some people have started to ask me some questions about the way the elections will run, exactly who or what is being elected, and even some thoughts about who I might be voting for in different positions. So in the interest of full transparency, here's what I know about the election, how I expect it to work, and my thoughts on the different races.

At the meeting, DA will elect 4 officers. The Chair, Vice Chair, Secretary and Treasurer. To comply with the strict Equal Opportunities rules set by the DNC nationally, the Chair and Vice Chair must be of opposite gender. Therefore, we will elect a Chair first and all candidates of the same gender as the Chair elected will be eliminated from consideration as Vice Chair. (So if a woman wins the Chair role I am automatically ineligible and will take my place on the sidelines!)

Fortunately, I didn't have any trouble deciding who I wanted to support as Chair, and fortunately (for me) that person happens to be of the opposite gender - our current Chair, Bill Barnard, is running for re-election, and he has my support. He's been a kind, thoughtful and hard working Chair in a very stressful time, and has led us with a lot of grace and courtesy. I'd be glad to continue working with him.

For Vice Chair - well, as I say I'm hoping for and would be very grateful for your support!

For Secretary, there are two outstanding candidates. Alicia Skubick and Lizza Moya have both been nominated, and are both outstanding individuals.

Lizza has been a Zone Captain for the Obama campaign, organising an effective and high energy group in Hampstead to track down US voters. She has ample campaign experience and is a professional communications expert - which would bring much needed skills to the organisation.

Alicia I have known as a dedicated volunteer for even longer than I've known Lizza, and she has been active in a wide range of Democrats Abroad projects, from the Database to the Newsletter to various events.

Both would be great Secretaries. I would vote for either, but since I can't I'll keep silent on the issue.

For Treasurer, we have a somewhat similar situation. Karen McClean and Eileen Taylor have both put themselves forward, and both are high quality individuals with exceptional skills. Karen was instrumental in organising the Debate screenings earlier this year, and in the process demonstrated remarkable skills of project management, creativity, and leadership.

Eileen is a successful professional in the field of Finance (yes, there are some left). She has been a tireless worker on voter registration, a dedicated phone banker, an energetic canvasser and a good humoured, thoughtful and intelligent voice throughout the campaign. I actually first met Eileen when she was representing the Hillary Clinton position and I the Barack Obama position on CNN during the primary, but she was gracious, warm and open minded, and when the primary came to an end she was the first person to call me and say that she was excited to help.

In fact, I specifically called Eileen and asked her to run for this position, because I believe that she has a wonderful attitude as well as an impeccable skill set. For that reason, I personally will be voting for her - despite my deep respect for Karen who could also do a great job.

As well as the Officers, during this meeting we will elect members to serve on the Executive Committee, which guides the organization and provides oversight and approval to the actions of the officers. This is an important role, and it is important that the Committee function well as a group, as well as having excellent members within it. The size of the Committee is not pre-determined, but it is expected that the Nominating Committee will recommend we keep to the existing situation where we have 8 at-large members, plus the four officers. There are 30 people who have put themselves forward to be Executive Committee members - making this an extremely competitive race.

I have thought long and hard about who I personally will be voting for, and to be honest I am STILL struggling to come up with a precise list of 8 names. Any list would inevitably leave out a lot of good people whose work I admire, and who I hope will remain involved no matter what.

But I do want to mention to you a few names who may not be well known to you all, but who I would respectfully ask you to consider voting for.

The first is Mark Mullen. If you aren't sure who Mark is, ask yourself if you remember coming across a 6 foot plus Texan in glasses and an O'Bama shamrock t0shirt - if you have, chances are that was Mark. Mark was a zone captain for the campaign in Bloomsbury, and he was an unstoppable force hitting the streets every weekend to get Barack elected. Mark actually travelled back to Florida to volunteer during runup to election day, and was an invaluable supporter for Barack starting very early in the Primary. Having lived all over the world, and with a professional background in democracy building, I believe he has a unique and constructive perspective to add to our work.

Another person I'd like to tell you about is Bill Rubin. Bill was an early Obama supporter here in London who went so far as to pack up himself and his wife to return Stateside starting early in the Primary as a full time volunteer in some tough states. Eventually he was hired on to be a Field Director, and in the General Election he performed miracles in the difficult but critical area of North Eastern Pennsylvania. Again, I think Bill would add crucial campaigning expertise to the work of Democrats Abroad UK. I mention Mark and Bill specifically because I suspect that these two people may be less well known to the group at large - precisely BECAUSE they have spent so much time and effort on behalf of Barack back in the States.

But there is one name that should be very well known to you all, who I would also like to give my strong backing to. And that's my co-organizer Rob Carolina. I've made a lot of demands on Rob over the past year or so - a lot of (frankly) unreasonable and over the top requests for help. But every single thing I've ever asked of him, he delivered, and then went on to do a lot more that I never would have dared to demand.

I'll be casting one of my Executive Committee votes for him on March 1 - I hope you will too! And finally....

The DAUK Council has traditionally been a fairly large body of active members who feel committed to helping us deliver our goals. Their specific responsibilities are to approve changes to the bylaws, and to attend at least two meetings in the year. Jus tto clarify, there is NO reason why a member can't continue to be a strong, active and effective supporter of and volunteer for this organisation whether or not they have any elected role - some of our most active campaigners today are not on any of these bodies, but they do great work and we love and appreciate them for it. So if reviewing amendments to the bylaws and attending procedural meetings isn't your favorite thing, don't feel like you HAVE to stand for the Council (or ExCom) in order to be an active member.

But if you WANT to do that - bless you for it! The size of the Council is not stated in the bylaws, and my understanding is that in this election there will be no artificial limits imposed, but that as per the bylaws members will be required to earn a majority of the votes (ie get votes from more than 50% of the people in the room) in order to be elected. With that in mind, I personally will be voting for everyone on the list EXCEPT for a couple of specific individuals who I do not feel able to support. I would be glad to tell you who those two people are and why I can't bring myself to cast a ballot for them if you want to e-mail or call me privately - but I do not want to malign their names publically.

So there it is. Hopefully, that's everything you ever wanted to know about DAUK elections but were afraid to ask (probably it's a thousand times more than you ever wanted to know! Thanks for reading). If you do have any questions, or thoughts, or you just want to shoot the breeze about this (AKA gossip) - feel free to give me a call or drop me a line. E-mail me at karinjr at hotmail.com

Well, as Karin highlighted with pleasure, we've now got a head for the new Office of Urban Affairs. And you may recall that last week I was wondering aloud about how Mayors will be held accountable when it comes to ensuring monies invested in Recovery are well spent in our cities. Though the devil is always in the details, one thing is for sure - systemic change always needs leadership from the top. And I'm pleased to be writing today that we've certainly got that in terms of the messages getting out. The President recently spoke to the United States Conference of Mayors and stressed that the emphasis on greater transparency and accountability in terms of the public spend is going to be pushed down through the chain of command. He said: “I want to be clear about this: We cannot tolerate business as usual -- not in Washington, not in our state capitols, not in America’s cities and towns.” The Mayors have been warned.....