Republican Fiscal Responsibility is Dead. I mourn its loss...

This week, the Senate passed a bill that would:


"impose a requirement that key parts of the budget must be paid for with spending cuts or tax increases to prevent the federal deficit from increasing."

This is called "Pay As You Go", and it's a discipline that was brought in at the urging and under the administration of President Bill Clinton.

Under the Bush administration, this approach was scrapped, enabling the turnaround from a massive budget surplus to the $1.3 Trillion deficit that President Obama inherited.

Now, with Obama's encouragement, the Senate has passed a bill imposing restrictions on itself - if they want to spend more, they have to find the money from elsewhere or raise taxes. If they want to cut taxes, they also need to cut spending or find efficiencies that match. It's neither a progressive nor a Conservative approach - it's a discipline and a responsibility.

Every single Senate Republican voted against it.

Obama spoke yesterday to the entire Republican House Caucus at their annual retreat, answering their questions for over an hour. Check it out:

(Hint: you can click through to various highlight moments on the White House page...)

I found it riveting, a real and substantive back and forth that rises above the level of the"Death panels!" "You hate America!" shout fest that politics so often descends to these days.

Obama's main theme here was clear, and has been consistent since the pre-campaign days: there are some clear disagreements between us, but also a lot of areas where we can all agree. It shouldn't be that hard to work together on the stuff that's constructive and to be polite in working out where we differ. As an example of failure in the former, he pointedly mentions House Republicans who voted against the Stimulus package, but then attended ribbon cuttings for stimuls programs in their districts.

On that latter, he argues that the crazy rhetoric often used in opposition actually gets in the way of being able to influence governing:


If the way these issues are being presented by the Republicans is that this is some wild-eyed plot to impose huge government in every aspect of our lives, what happens is you guys then don’t have a lot of room to negotiate with me.... You’ve given yourselves very little room to work in a bipartisan fashion. Because, what you’ve been telling your constituents is: this guy’s doing all kinds of crazy stuff that is going to destroy America.

Great stuff. And very British - I've been saying for years that I'd love to see the President face the opposition in a question time format.
Posted by Obama London at 17:21 0 comments

Everyone keeps saying how the thing US voters care about most right now, is the economy. And rightly so - after all, we're in a jobs crisis and people are hurting.

But today we learned that the US GDP grew by 5.7% in the fourth quarter of 2009 - that's a good start even if it we still have a long way to go in translating the recovery into jobs.

The above chart tells quite a story of Obama's 1st year of economic management. (Hint, the stimus package passed near the end of Q1 2009.)
Posted by Obama London at 16:08 1 comments

"No Pants Wetting" - Oh David, how we've missed you!

David Plouffe, the stellar campaign manager who guided Obama for America through the turbulent waters of the primary and general election is now reported to be back at his desk. Plouffe initially declined the opportunity of working in the administration in order to spend time with his newborn son and to write a book about the campaign.

But this weekend, the White House let it be known that Plouffe would be back as a special advisor to the White House, leading up to the midterms. Not a moment too soon, I say!

And he's off to a good start with this thoughtful but crystal clear op-ed in the Washington Post yesterday:


This will be a tough election for our party and for many Republican incumbents as well. Instead of fearing what may happen, let's prove that we have more than just the brains to govern -- that we have the guts to govern. Let's fight like hell, not because we want to preserve our status, but because we sincerely believe too many everyday Americans will continue to lose if Republicans and special interests win.

"Is that bad when the lines go together like that?" 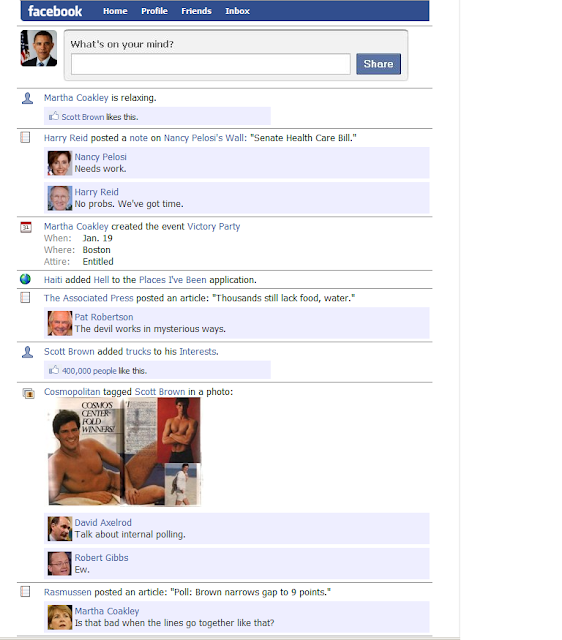 After Massachusetts: Where are we, and where do we go from here?‏‏ 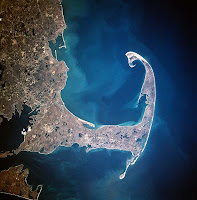 UPDATE: Center for American Progress President John Podesta has embraced my "Pass the Senate Bill and amend it through reconciliation" plan as outlined below. John's a pretty smart guy...


Although the Senate seat in question was universally described as "Ted Kennedy's" seat, the truth is that Teddy himself never took it for granted: he worked his tail off every year, and campaigned fiercely in every election, for the people of Massachusetts.

Whether the Republican Scott Brown will be the kind of Senator who lives up to Ted Kennedy's ideal of hard-working service remains to be seen. But he has not made a good start with his position that the moderate, bipartisan universal health care system currently operating in Massachusetts is good for citizens there, but would be bad for the rest of America. Scott Brown has vowed to reject comprehensive health care reform, leaving Democrats without the 60 votes that current Senate protocol expects for any legislation.*

So, has health care reform been defeated?

We have passed comprehensive health reform through both houses of Congress. No one has ever gotten this far before - and it means we're inches away from the finish line. If we have the will to step over it.

The simplest route to passage of a comprehensive health care reform package would be for the US House of Representatives to pass without amendment the bill passed in the Senate. If House Democrats were willing to do this, we could literally have a bill on the President's desk tomorrow for signature.

Is the Senate bill everything I would hope for? No. But it is a giant step forward towards real reform. It instantly ends the most offensive and unfair practices of the insurance industry (rescission, denial for pre-existing conditions, and lifetime caps on coverage, for instance) while establishing in law for the first time the principle that every American must have insurance. It creates a national health care exchange that for the first time creates nationwide competition free from our broken system of state by state regulation. It offers tiered subsidies that fill the gap between the rich and the poor, levelling the playing field for the middle class. It?s a start. A very good start.

But House Democrats are rumoured to be saying that they won't support it.

By holding out for better, House Democrats would almost certain wind up with nothing at all. And that's not good enough. Not this time. We just can't afford another generation of delay before we get serious about solving the health care crisis.

What Can We Do?

I suggest** the following: each and every one of us should call our Congressional Representatives THIS WEEK. We should give them the following message:
Please call your Representative today, and please e-mail me back to let me know what they say.

The American people need our leaders to have the courage of their own convictions. And each and every one of us needs to get busy making that happen. Break's over.


* Whether this supermajority standard is reasonable in the first place is the subject of another message for another day, but these are the rules under which the current bills were passed, and for the purposes of this exercise we need to assume that it will not change during the current health care debate.

** Please note, as always this e-mail is sent in a personal capacity and not on behalf of Democrats Abroad, the Obama administration or the Democratic Party as a whole. I am asking this of you as a citizen and passionate supporter of this Administration who wants it to succeed.
Posted by Obama London at 11:27 1 comments