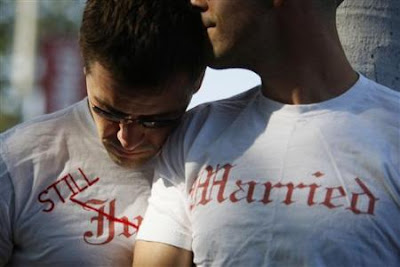 Attorney General Holder yesterday announced that the Obama administration would no longer defend the so-called Defence of Marriage act in Federal Court.

This is great news. But it's a little complicated - so I've been reading up on the matter trying to figure out exactly what the Justice Department's new policy now means, and what the implications will be. Lawyers who read this blog (I know you're out there!) please feel free to chime in with further info as I'm just figuring this out as I go along.

The big news here is that the Obama administration believes gays and lesbians DO meet the standard of requiring heightened scrutiny under the equal protection clause of the constitution. Previous court cases have been raised in jurisdications where the courts had previously ruled that this standard should not be applied to sexual minorities - but no such precedent exists in the 2nd Circuit Court, where two new cases are to be tried. Nor has the Supreme Court ever ruled on this specific question.

The Obama administration therefore had no precendent to be bound or guided by in this instance, and the Justice Department therefore had to fashion its legal reasoning from scratch.

Under those circumstances, the position that they take is that section 3 of the Defence of Marriage act - the portion that specifically prevents the Federal government from recognising same sex marriage that are legal within a particular state - is unconstitutional. They will not defend it. But that doesn't mean that it is no longer law.

Until either 1) Congress repeals the law or 2) a Federal court rules the law unconstitutional, the provision will stay on the books.

So there's no immediate effect to this decision. But the government's position does make it far more likely that the law will be struck down by the courts, because it is difficult for anyone other than the federal government to claim that they have legal standing to defend the law.

This is a narrow, legalistic decision on the part of the Obama Justice Department, but the thinking that underlies it is boldly clear:


“It’s a lawyer’s decision based on a careful consideration of the law,” said Paul Smith, head of the Supreme Court and appellate practice at Jenner & Block, and counsel with Gay & Lesbian Advocates & Defenders in a DOMA challenge now pending in the U.S. Court of Appeals for the 1st Circuit.


“There was only one right answer,” he said. “When you examine the law and which groups need heightened protection under the equal protection clause, you realize that sexual orientation is one of those kinds of discrimination that is suspect. There really was no way for them to defend Section 3 of DOMA because the law doesn’t serve any purpose other than to stigmatize persons.”

If a court eventually does decide that Section 3 is unconstitutional, as the Obama administration believes, that would greatly complicate the work of the US Government because suddenly we would have a patchwork system in place for federal benefits. Gay couples would have immigration rights in Massachusetts, but not in Ohio. They could have social security survivor benefits in Iowa, but not in Kansas.

But I say - bring on the mess. Because the more people are forced to confront the reality of gay men and woman and their "unreasonable demands" to be treated just like everybody else, the more hollow and pointless the arguments of the opponents seem.
Posted by Obama London at 10:28 4 comments

UPDATE: I was right - Facebook (a client of my employer) have now removed the Lou Sarah Facebook account stating that it did in fact violate their terms of service: “The account was found to run afoul of our terms and it was disabled,” wrote Facebook official Andrew Noyes.
I wonder if Wonkette journalist Jack Stueff started pursuing this angle before or after I pointed it out to him by e-mail?
Yesterday I came across this intriguing tidbit from Wonkette, in which they used info from the recently leaked manuscript from a former Palin staffer to identify Sarah Palin's gmail account, and by conducting a simple search they were able to identify that Palin has a Facebook account under a different name, "Lou Sarah" that she has been using to "Like" content on her own and on Bristol's Facebook pages, and to comment positively ("amen!") on both pages. The profile still exists, but has now been scrubbed of its activity record - when I looked at it last night, though, it still looked the way it did in the Wonkette story:

So here's the thing. I do a lot of work on Facebook. I work for an agency that has Facebook as a client. I manage Facebook pages, I advise clients on use of Facebook. I've royally screwed things up on Facebook from time to time as well. Hey - it's how you learn!

So I think it's probably important to clarify a couple of things quickly (don't worry, you may commence your respective "Sarah Palin is the Devil" and "How dare you attack this woman who will SAVE this COUNTRY!" diatribes momentarily).

1.You will not provide any false personal information on Facebook, or create an account for anyone other than yourself without permission.

2.You will not create more than one personal profile.

But it's not immediately clear whether Palin has done this or not.

The famous Sarah Palin page with 2.75 million fans is a page - not a profile. A Facebook page is sort of like a website set up on Facebook. There is no limit to the number of people who can "Like" a page, and pages can be managed by multiple users. Pages that represent a brand or famous person are asked to confirm that they do in fact represent that brand or person.

Facebook profiles, on the other hand, represent individual people, not brands. They have "Friends" rather than being "Liked", and are limited to a maximum of 5,000 "Friends". The important thing to note here is that Facebook pages can only be managed by people with a Facebook profile of their own.

So, if "Sarah Palin" the individual person and politician would like to directly edit and manage "Sarah Palin" the Facebook page, she needs to have a Facebook account of her own. And, as a famous person, she may well want to avoid using her actual name for that, since people that she doesn't know personally shouldn't interact with her via her profile, but rather via her page.

So, in short, it wouldn't be so odd if "Sarah Palin" the person (hmmm... getting tired of the scare quotes, will drop them from now on) had created an account under a disguised version of her real name - Louise is her middle name, so Lou Sarah isn't a million miles from representing her - and that personal profile might well be something she would want to use to interact with people she really knows such as... her daughter. An occassional comment on Bristol's page from this account therefore doesn't strike me as terrible, especially since Bristol will presumably know the secret of "Lou Sarah's" real identity. Moms are allowed to gush over thier kids, so we'll let that go.

BUT - consider for a moment Lou Sarah's comments on the Sarah Palin page. Firstly, liking and commenting positively on your own content is a bit sad and pathetic (and in this case, pretty pointless - it's not like she needs to drive traffic to the page!) but not against the rules. But the fact that she was able to post at all as Lou Sarah on the Sarah Palin page shows that the Lou Sarah account is not an admin on that page.

If Lou Sarah had been one of the profiles permitted to post to the Sarah Palin page, then any comments she made on that page would not appear under her profile. Page admins appear under the identity of the page whenever they post on their page.

Thereby, QUOD ERAT DEMONSTRANDUM we arrive at a great big circle. There are only two possibilities here. Either Sarah Palin herself is not an administrator on the Sarah Palin page (which seems unlikely) or she does indeed have two separate Facebook profiles.

Right then.
Posted by Obama London at 10:16 2 comments

I do feel obliged to note that President Obama is coming to London on a State Visit this Spring. He and Michelle be holidaying with the Queen (like you do) May 24-26th, when no doubt the world's press will be looking for a repeat of the "mutual and spontaneous" touching between Michelle and Queen Elizabeth that caused such a tizzy last time around.

Stories from my life: last Thursday when the visit was announced the woman who handles press relations for Democrats Abroad called me in a panic to ask if I was free to go on BBC news to talk about the visit. Which at that point I had not yet heard about. I said I was happy to go on and talk, but really: "what is there to say? Obama's coming! Yay! We like Obama. We like it when he comes here. Go Barack! Go Michelle!"

Not the most insightful reporting the BBC's ever done, you know?

About half an hour later the BBC producer called me back to say that on reflection they decided to cover the Bahrain protests in more detail instead. I said I thought that was good news judgement on their part. 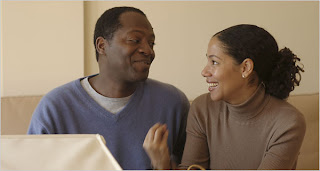 On Thursday night, Democrats Abroad here in London were given the chance to DNC Political Director Clyde Williams and his wife, Mona Sutphen who until very recently was a Deputy Chief of Staff for President Obama. And their two adorable children.
Clyde and Mona were both impressive, impassioned and positive in speaking about the challenge ahead for Democrats. The kids ran around a lot and were amazingly comfortable and confident while mom and dad did their thing. I liked them all a lot.
Mona in particular, though, is a brilliant, eloquent, appealing, down to earth and inspiring woman. 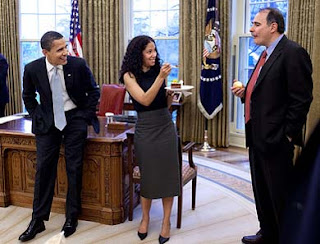 Having served as a foreign policy advisor to then-Senator Obama during his campaign and as a highly respected Deputy since then, Mona has been very close to the President and a key advisor within the White house. Which, for me is the definition of mixed feelings - because having met her I'm incredibly pleased to see the calibre and quality of advice that the President has clearly been getting over the past couple of years. But I'm now saddened to know that Mona's last day at the White House was last Tuesday.

I asked her if she had considered running for office herself - and she suggested that she wasn't interested in that, but that Clyde was seriously considering it. I wish him all the best - I think he'll be great.

But I'll be very disappointed if I don't see and hear a lot more from Mona herself in the coming years.

Either way, hats off to the definitive Washington "power couple".
Posted by Obama London at 12:56 0 comments